Written by Murray Ashton on Apr 26, 2013. Posted in Interviews

One of the great privileges of working at The Location Guide is the amazing people we all get to meet. A truly mixed international group of production professionals all with interesting backgrounds and great location stories to share.

On a recent trip to Jaipur in India I called local producer Dileep Singh Rathore to see if he was available for a coffee and a chat. “I’m delighted you called, I’m just back from a tech scout in Calcutta," he replied: "How about you come and spend the weekend with me on my family estate and by the way do you play polo?"

I don’t play polo but off I went to spend the weekend with Dileep and his delightful family at their magnificent 150-year-old Talabgoan Castle in the heart of Rajasthan, which Dileep has recently restored and part-converted into a fabulous boutique hotel and heritage resort, an ideal shoot and stay location. Dileep is obviously a good multi-tasker with three mobiles permanently to hand!

Dileep scouted throughout Rajasthan with director Christopher Nolan and Exec Producer Kevin de la Noy for The Dark Night Rises, which OTR serviced and shot on location in Jodhpur.

He is very involved, in partnership with the Government of India Tourism Department, with promoting India and Rajasthan in particular as a filming destination to international producers , directors and film studios from the US and Europe. Dileep can be often seen on the international circuit invited to share his location and production expertise on producer panels including The American Film Market (AFM), Indian Film Festival of Los Angeles (IFFLA), Association of Film Commissioners International (AFCI) and their Locations Expo and the Screen Producers Association of Australia conference in Melbourne, Australia, among others. 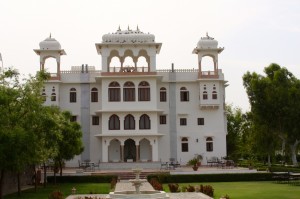 His production service credits are too numerous to mention here but include the India unit shoot of blockbuster movie Blood Diamond, shot in Mumbai, and The Way Back by director Peter Weir, which was shot on location in Darjeeling. In 2011, Dileep scouted throughout Rajasthan with director Christopher Nolan and Exec Producer Kevin de la Noy for The Dark Night Rises, which OTR serviced and shot on location in Jodhpur.

He is currently in pre-production on German TV movie A New Life for Roxy Films, shooting in Calcutta, prepping a Swiss feature Baby for Plan B Film Gmbh shooting in Mumbai, a music video for Luti media from the UK and a French TVC for SoLab shooting in Rajasthan and at his family film-friendly shoot and stay location Talabgoan Castle. He is also organising his first polo tournament and overseeing development of a further 30 hotel rooms on the estate - now I understand why he needs three mobiles!

Shoot and/or stay at the Talabgoan Castle location/boutique hotel and film-friendly location.

TLG production discount: 10% discount for all registered users of The Location Guide