Paris-based creative company Nicholas Berglund headed to the wilds of Finland to film a new stylised winter stills campaign for vodka brand Finlandia. Shooting took place in three locations in the south of the country, including an archipelago on the Baltic Sea west of Helsinki.

The location brief for servicing company Grillifilms called for a barley field, an archipelago and a pine forest with tall trees. Around a dozen different options were considered, with another practical consideration being that the locations were all within 150km of each other and Helsinki, Finland's capital. 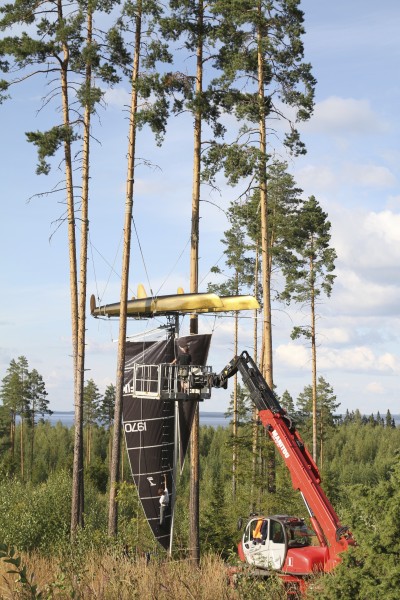 “Transportation to the archipelago location required some detailed planning,” recalls Mika Pajunen, a Producer with Grillifilms: “We had to transport production, make-up, a wardrobe bus, a light truck and props truck and 50 crew members with catering to a small islet in the Baltic Sea 15km off the coast.”

Moving cast, crew and equipment around this environment once they got there was also tricky, although the lack of tidal movement around the archipelago worked to their advantage.

Further north, filming in the pine forest near Helsinki involved a separate challenge as the team mounted an upside-down catamaran 15 metres high in the treetops to create the shoot's striking imagery.

“Mounting the boat in the trees had to be planned and executed with precision under the supervision of a safety officer,” Pajunen adds: “All five cranes carrying lights and camera had to be secured against gusts of wind and uneven and soft soil. We found the perfect location just 50 metres off the main road so transportation was rather easy!”

Filming took place during the summer months when Finland’s northerly latitude produces 18 hours of sunlight a day. The country’s summers are warm in the south and they had good conditions throughout the six-day shoot.

“All in all, shooting was hunting for the perfect location, weather and light,” Pajunen concludes: “Six days, 60 crew, three interesting locations and lots of fun!”