Tom Cruise headed to Iceland to shoot scenes set in the war-scarred future of his new movie Oblivion. The film follows Cruise’s former Marine commander Jack Harper as he questions his mission on a future Earth ravaged by alien conflict.

Iceland doubled for a post-apocalyptic American East Coast. The expansive wilderness environments fired the imagination of director Joseph Kosinski and his production team early in the planning process. 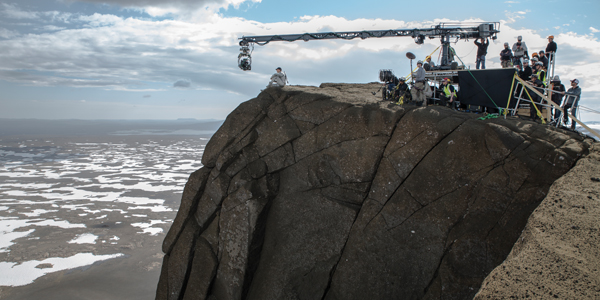 “There’s the black sand and great sense of desolation in Iceland,” says Supervising Location Manager Michael John Meehan: “There are places in the world where you can get little pockets like that, but nowhere else has Iceland’s vast expanses that sweep to the horizon in that particular colour palette.”

While the film’s studio work took place in Louisiana, the Oblivion team filmed for ten days on location during Iceland’s summer, when the country’s northerly latitude means the sun doesn’t fall below the horizon. Filming began at the 10,000-year-old crater known as Hrossaborg in the north-west, which doubled as the remains of an American football stadium with some visual effects touch-ups in post-production.

A set of part of the Empire State Building’s observation deck (below) was also shipped over from the US and erected in the Highlands region of the country, which became one of the key Icelandic filming locations.

“We filmed in the black desert of the Highlands region about two hours from Reykjavik,” recalls Leifur Dagfinnsson of servicing company Truenorth: “We set up a temporary unit base nearby and the futuristic tone of the film was established in-camera.”

Scenes where Harper surveys the blasted landscape of his world were shot on a rocky precipice known colloquially as Earls Peak in the west of the country. Crew and equipment were airlifted to a nearby base camp and then taken to a landing zone on a shoulder next to the peak that could accommodate one helicopter at a time. Hand rails and safety lines were set up as part of the comprehensive safety measures.

There’s the black sand and great sense of desolation ... Nowhere else has Iceland’s vast expanses that sweep to the horizon in that particular colour palette.

“We were using large camera cranes on top of Earls Peak,” Meehan comments, “so we got special permission from the Icelandic government to build secure filming platforms that were bolted to the rock. We worked with a lot of Icelandic crew and the world-class Truenorth.”

“Earth is a main character in this movie,” adds producer Dylan Clark: “It’s what Jack is fighting for and Iceland shows an Earth coming back to life. It has moss underneath the black sands, it has water underneath the glaciers, and the colour and the beauty of the country gives us that character.”