New TV drama Da Vinci’s Demons filmed its first season on location in and around Swansea in south Wales, doubling the region for 15th Century Italy. The show is a fictionalised account of the early life of Leonardo Da Vinci as he faces political and supernatural turmoil in Florence.

Headed by renowned writer and series creator David S Goyer, the production team considered filming locations around the world. Wales, however, had the best combination of a strong crew pool and great locations. The country also had relationships with both American network Starz and BBC Worldwide through the Welsh shoot for Torchwood: Miracle Day, the spin-off of Cardiff-based Doctor Who. 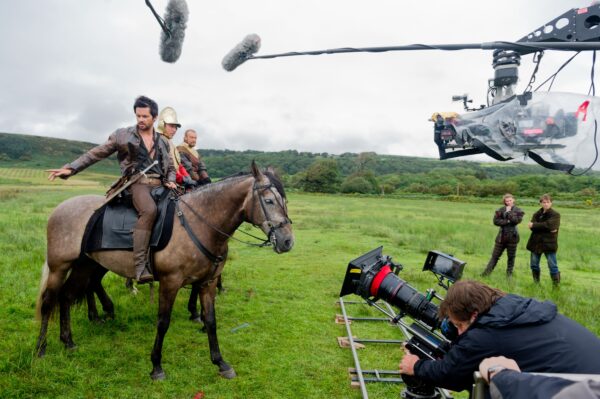 “Wales and the Swansea area are enormously flexible,” says Gareth Skelding, Location Manager on Da Vinci's Demons: “There are 363 different castles, lots of variation in a small area and there’s a great crew pool.”

A former factory in Neath Port Talbot just outside Swansea was renovated for use as the production’s main studio space, eventually hosting more than 30 sets for the shoot. A property grant was issued by the Welsh government through Wales Screen Commission to help with the conversion.

“The production established itself in 265,000 square feet of converted industrial space in a former Ford factory on the outskirts of Swansea,” comments Penny Skuse of Wales Screen Commission: “The production design team worked on re-creating 15th Century Florence, including Da Vinci’s workshop and lodgings, elaborate halls and courtyards. They even constructed an interior of the Duomo Cathedral in Florence.”

“The sets are absolutely massive,” adds Goyer: “It was one of the benefits of going to Wales to recreate period Florence. One of the other reasons we went to Wales is because there are over 600 castles there within easy travel distance. And we've been shooting in quite a few of them.”

Key filming locations outside the studio included Castell Coch (below), the 13th Century Caerphilly Castle and Margam Castle near Port Talbot. Margam Castle is a 19th Century Tudor Gothic Mansion which offered a “blank canvas” and the flexibility to build interior sets of Renaissance-period Florence. In addition, the production team used the castle’s thousand acres of parkland to double for the Tuscan countryside.

“The series has worked really well for us,” adds Margam’s Park Manager Michael Wynne: “They’ve been able to use various rooms within the castle and build complete sets within it, without having to worry about removing items or being too precious, as they would with a fully furnished stately home.

“The arrangement has been mutually beneficial - the filming has not impacted on our main business and in turn we have been able to simply let the crew get on with it.”

For the Welsh government the shoot is a strong measure of what Wales has to offer the global production community. While the country’s striking landscapes are more established in international perceptions of the country, the availability of funding to convert buildings into studio space is also a major advantage for filmmakers.

“The new (UK Tax) incentives have the potential to attract more high-quality drama production to Wales,” Welsh Economy Minister Edwina Hart concludes, “and will support the work we are doing on a national and international level to promote Wales as a first-class, cost-effective film and TV location. It will make Wales an increasingly attractive and competitive location."

Da Vinci's Demons starts in the UK on Friday 19 April at 10pm on FOX.