Director JJ Abrams and production company Lucasfilm will shoot the new Star Wars movie on location in the UK. The news marks a homecoming for the sci-fi franchise that was based at Elstree Studios outside London when George Lucas started work on the first film in the mid-70s. 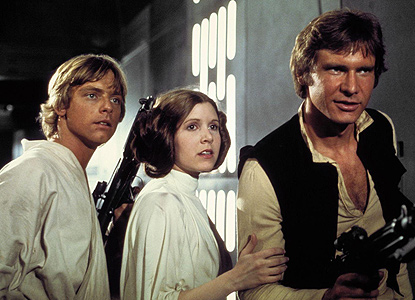 "We've devoted serious time and attention to revisiting the origins of Star Wars as inspiration for our process on the new movie and I'm thrilled that returning to the UK for production and utilising the incredible talent there can be a part of that," said Lucasfilm President Kathleen Kennedy: "Speaking from my own longstanding connection to the UK with films like Raiders of the Lost Ark, Empire of the Sun and recently War Horse, it's very exciting to be heading back."

“We are delighted to welcome Star Wars back to the UK," added Iain Smith, Chair of the British Film Commission: "I believe we have an unparalleled offer in terms of our skills and talent, and this announcement is yet another vote of confidence for our infrastructure and the quality of our facilities."

Disney recently bought Lucasfilm from Star Wars creator George Lucas in a multi-billion-dollar deal and has suggested there'll be a new Star Wars film every year from 2015. The news signals a continuing long-term association between the UK and the Star Wars franchise.