Becky Brake first worked with filmmaker JJ Abrams on his action TV drama Alias. She's since become a regular locations collaborator and talks to The Location Guide about big-budget location filming, the Mission: Impossible franchise and working on Star Trek Into Darkness.

“I think there is a general public perception that Star Trek films are shot mostly on stage or that all of the film is done with stage and visual effects only,” Brake begins: “It’s not true.”

Star Trek Into Darkness is the second in the rebooted science-fiction franchise that follows the adventures of the young Kirk and Spock and their Enterprise crew. While limited filming took place in the UK and Iceland, the production was mainly based in California, an unusual move for a big-budget feature these days.

One of the more eye-catching locales was the National Ignition Facility within the Lawrence Livermore National Lab, a nuclear research facility outside San Francisco. Here the production team built a set in amongst the lab's precision instrumentation, after eight months of fruitful negotiations.

“Several set pieces had to be placed fractions of an inch away from precision scientific equipment,” Brake recalls, “with fibre optic cables all around and extremely sensitive sensors - even the heat from your computer could set off an alarm!

“Filming at this location was like filming in a giant ‘clean room’. It was necessary that every single piece of our equipment was wiped down, cleaned and inspected prior to entering the building.”

Brake is a member of the Location Managers Guild of America and her feature collaborations with Abrams date back to her role as Supervising Location Manager on his 2006 directorial debut Mission: Impossible III. The film involved an intense action sequence where Tom Cruise and his spy colleagues are ambushed on a bridge. The production team wanted to film on the Chesapeake Bay Bridge-Tunnel in Virginia ("JJ was very excited about the visual"), but Brake was far from convinced that the studio could get permission.

Several set pieces had to be placed fractions of an inch away from precision scientific equipment with fibre optic cables all around and extremely sensitive sensors - even the heat from your computer could set off an alarm!

"The action sequence that was written and envisioned that we were requesting to film may have sounded an absurd request," Brake recalls, "One scene required 'flipping a car onto its top' and simulated an explosion on a bridge that sits 70 to 80 feet high and is 26 miles long, all the while expressing confidence that we can actually do this safely!

"Explaining to folks outside of the film industry in a way that instils trust and confidence in our ability to accomplish our scenes safely often can become the biggest part of the challenge."

Brake remembers sitting on the plane on the flight out to Virginia with the famous 'dum-dum, dum-DUM, dum-dum' Mission: Impossible score playing in her head as she felt so daunted by the scale of their request. When the official 'yes' came through, Abrams personally called Brake to offer his thanks. "Those acknowledgments mean a lot and I love that about working with him; he’s very kind," she adds.

While the bridge (above) was certainly used for the sequence, the team also ended up using a ranch location in California for elements of the ambush that needed green-screen effects. This turned out to be "much more challenging" than filming on the bridge itself, as a priority for the team was protecting an endangered plant and protecting the seed base from a road build and various elaborate pyrotechnics. It was a great success and Brake is "most proud" of this leg of the shoot as a result.

"We built and removed the entire bridge set there, shot scenes involving live action, major car stunts and substantial pyrotechnics," she comments: "If you were to see the location today, there is no evidence that we were ever there."

Flash-forward four years and Brake was back as Supervising Location Manager on the franchise’s fourth entry Mission: Impossible – Ghost Protocol, with Abrams this time on board as a Producer while Brad Bird made his live-action debut as director.

The film is most famous for Tom Cruise's high-rise stunts on the world's tallest building - Dubai's Burj Khalifa - where the star and crew worked more than 125 storeys high for the centrepiece action sequence. Perhaps unexpectedly, Brake describes this as "a much easier location" from a safety perspective, as they didn't have to worry about inquisitive members of the public. 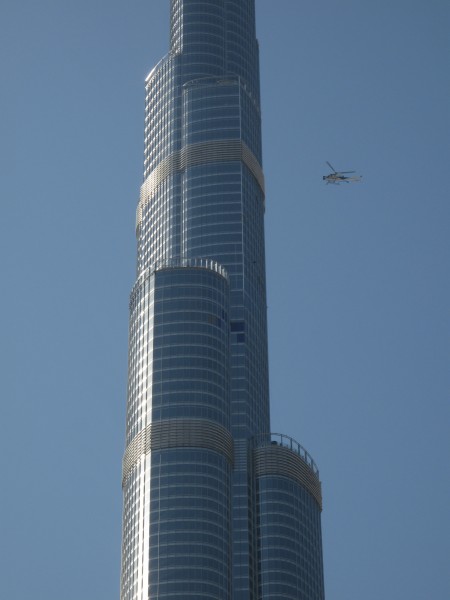 "Everyone on set was governed by the same safety rules and regulations, which eliminates the risk of unknowns," Brake explains: "The general public is absent so there is less of a challenge to creating and maintaining the safe environment. We're able to leave it to our professional crewmembers – for stunts, construction and rigging - and therefore there are fewer surprises."

One unexpected challenge was the need to provide impromptu helicopter landing zones for the frequent occasions when Emirati royalty made a visit to the set.

"Often this would be in the middle of a busy downtown street," Brake adds: "Although we had support of the local police, at one point the locals got excited at the sight of the helicopter and started running toward it as it was landing, in order to catch a glimpse. We always prepare for these scenarios in our heads because we know they happen out of nowhere."

Safety is always a central concern for Brake throughout the process and this can involve protecting the public from landing helicopters, flying debris or fast moving cars. It’s also important to have clear communication with local communities in order to gain their trust before they host the "massive circus" that is large-scale film production. Language barriers can be a challenge on an international production, but even in English-speaking territories there are "nuances to every community and culture" that need to be taken into account.

If the images and locations are so universally recognisable, it's more difficult to sell the audience on what we are using it for in the film. It also potentially robs us of the 'Wow' factor.

There’s a demand for increasingly exotic locations for large-scale productions. Scouting for the Mission: Impossible films involved working with regional film commissions, local scouts and service companies for their recommendations for locations that hadn't been seen before on-screen. Brake also surrounds herself with a locations team that brings "a different set of knowledge or skill sets" to the table. She singles out Scott Trimble as a talented scout for sci-fi projects, Navit Dutt for India locations and Lyall Gardiner, who helped recommend additional Dubai locations for Ghost Protocol once the Burj Khalifa was confirmed.

While locations may look great in their raw state, art design and set dressing is often still a major operation, especially for features where the viewing platform – the cinema screen – is clearly larger and so there’s enormous pressure for accuracy on the details. Filming in the IMAX format amplifies everything still further.

"It's more and more difficult to find fresh and new locations that people haven't visited from their computers," Brake considers: "So many places are familiar now, even if they've never been filmed before. If the images and locations are so universally recognisable, it's more difficult to sell the audience on what we are using it for in the film. It also potentially robs us of the 'Wow' factor we love to provide for the audience."

To find out more about Mission: Impossible - Ghost Protocol at the Burj Khalifa click here.