Tempomedia filmed on location in the sand dunes of Gran Canaria in the Canary Islands west of Morocco to capture an epic desert fantasy for soft drink brand Fanta. Fanta: Official Sponsor of FANTAsy shows a princess in a desert outpost defending herself from a giant robot attack.

Central and southern Africa were considered as filming locations, but directors Alexander Kiesl and Steffen Hacker (known as Alex & Steffen) weren’t convinced. They knew Tenerife as tourists and had been impressed by the variety of different locations available there. 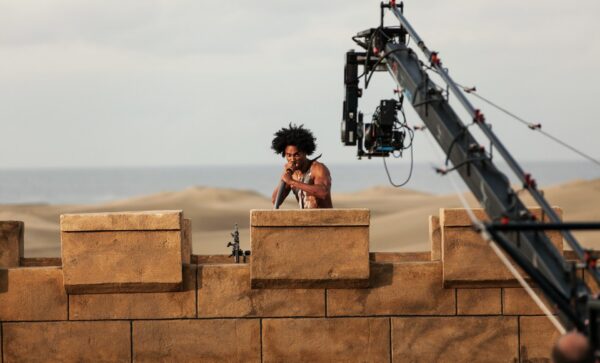 Regional servicing company Seven Islands Film helped introduce the directing duo to other location options throughout the Canary Islands. In the end they picked Gran Canaria locations at Playa de Arguineguin, the dunes of Maspalomas and a lake in Valleseco.

“The dunes on Gran Canaria served as a backdrop,” the directors explain: “We filmed right at the edge of it to have the full infrastructure with us, but in the background it looked like you were deep inside the desert.

“The end part of the film - the green lake - looked so typically mid-European (like in Germany) that it suited the subject of the film perfectly. Try finding this in South Africa - it looks close to Europe, but not really. It’s a similar thing in New Zealand. You can always see that it is just different; it’s not the Alps. That was the main advantage of Gran Canaria’s rich variety.”

The dunes on Gran Canaria served as a backdrop. We filmed right at the edge of it to have the full infrastructure with us, but in the background it looked like you were deep inside the desert.

Partial sets for the spot’s fantasy castle were built on a car park next to the dunes and digitally enhanced in post-production. This space was also used for some wire stunt work and blue-screen effects. A miniature remote-controlled helicopter filmed aerials, while plate shots of more extensive dunes on nearby Fuerteventura helped make the castle look more remote.

“There weren’t any real challenges,” the directors conclude: “Seven Islands Film serviced professionally to our and the client’s full comfort, so the locations did not bring anything unexpected or hard to overcome. It went smoothly as planned. Even the weather - which was not so secure at that time - played in our favour.”