Wieden+Kennedy Amsterdam has launched its new Heineken Dropped digital campaign filming on location in Alaska. Amsterdam-based Wefilm dropped sun-loving Spanish waiter Rikar in the wintry US state with the challenge of embracing his inner traveller to find his way home.

Filming in Alaska involved five days of prep in Anchorage in the south of the state, before the five-day location shoot that was mostly at the base of nearby Mount McKinley. The team travelled to the mountain by helicopter and then moved on the ground using snow shoes and sledges. They worked with local fixer Karen Casanovas and guide Chip Faurot.

“The weather can be fierce in Alaska,” says Bas Welling, an executive producer with Wefilm: “It was another way of producing as the whole production team was hiking with backpacks and sleds with luggage through the snow, without any mobile connection. At one point, they had to go by snow scooter for seven kilometres in search of a mobile signal.

“On our second shoot day heavy snowstorms came in, such that everything around was white. It was an amazing experience, but heavy circumstances for a producer. We were looking for extreme cold situations and that’s where Alaska came in: visually interesting, real heavy conditions and nothing other than ice to the horizon.” 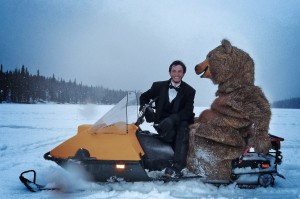 The Dropped campaign in fact began with commercial The Voyage – produced by Sonny London – which features a western traveller sampling the cultural delights of India. Filming spanned five nights in Jaipur in the Rajasthan region of north-west India where the team worked with local servicing company India Take One Productions.

“There were no specific sets built,” recalls Erik Verheijen, Head of Production at Wieden+Kennedy Amsterdam, “but we found a location on a square where we could use several buildings and spaces for our shoot. Of course we dressed them up where needed.”

The Voyage ends with a call for “legendary travellers”, which is where the interactivity of Heineken’s Dropped digital campaign picked up with Wefilm. Rikar’s trip to Alaska is the first of five ‘drops’ where ordinary people will be left out of their element in unexpected parts of the world.