Written by Murray Ashton on Jul 30, 2013. Posted in Interviews

Harriet was born and raised in Holland, and has lived in New York, Beijing, Surinam and Havana. She originally trained as a sculptress and art teacher, but fell into location scouting in the 90s when a photographer asked her for help finding locations for a project.

What can you tell us about Holland as a filming location?

In general I am asked to look for locations in Holland and sometimes Belgium or France. In winter I am often in Cuba, so I have a lot of amazing locations from there as well. Holland is a small country, just 350km north to south and 275km east to west. With its 16 million inhabitants, the country is highly populated.

Our filming infrastructure is excellent. We have got it all - the best crew members and equipment. Whatever you need is available here.

What are the most popular filming locations in Holland?

Holland started to boom in the 17th Century and this is still visible in the old city centres. The historic buildings have always been well kept. They still look authentic and not too polished.

On the other hand, Holland has got flashy new modern architecture. Spectacular bridges, family homes, fancy stores, museums and wind turbines. Apart from that we have also got empty rundown factories and warehouses, which are particularly favoured by photographers.

Over the years I have had assignments to double Holland for Paris, New York City, Italy and Japan here in Holland.

What has been your most challenging location job?

A super-difficult location I had to search for was for the film Only Love, directed by John Erman in the late 90s. He insisted on shooting a wedding scene in a catholic church, similar to St Peter's in Rome. Since Holland is a Calvinistic country with modest churches, this was a tough location to find. But, crazy at it might sound in a small village in the south of Holland I discovered a replica of St Peter's. It was a lot smaller, with marbled wooden pillars but the interior looked just like the real thing. Mr Erman was over the moon, as was I! 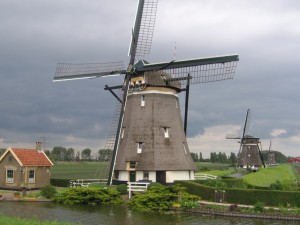 What kind of productions do you work on most commonly?

I have worked on hundreds of productions. Films, commercials, docudramas, reality shows, photo-shoots, web films and music videos. I think I did every telephone provider that exists, as well as banks, insurance, Nike and BMW.

What advice would you offer international production companies considering a shoot in Holland?

If you would like to film in Holland we have to apply for permits. This can take a while so it's smart to start at least four weeks before shooting. The weather is not always predictable. Our skies are magnificent - still the same clouds you can see in old Dutch landscape paintings.

Tulips can be seen from April until mid-June. As for medical care, this is absolutely terrific in Holland - probably the best in the world.

Where are your favourite filming locations?

My favourite locations are places where the owners are very flexible. While scouting, I always use every bit of intuition I have, in order to find pleasant location holders. How they will react to a big film crew makes all the difference.

While shooting America's Next Top Model on their trip to Holland, I found them a remote windmill in the middle of nowhere. The owner did not hesitate when the dressed-up models had to climb the wings of the mill in high heels. He was so cool. To me the most important element is when everybody feels respected and at ease during the shoot.

In winter I leave Holland and take off to some tropical country. I love to travel to unusual places and have crossed the world and back again. The last couple of years I spent winter in Cuba. In summer in my spare time I drive within half an hour from Amsterdam to the beach. I like to stay long after everybody has left, reading a book and eating cherries on the sand in the soothing sun.