Dutch production company Wefilm has continued Wieden+Kennedy’s Dropped campaign for Heineken by filming on location in Cambodia. Greek dancer Stavros was dropped in the Cambodian jungle with a giant rubber-duck boat for company and challenged to find his way home. 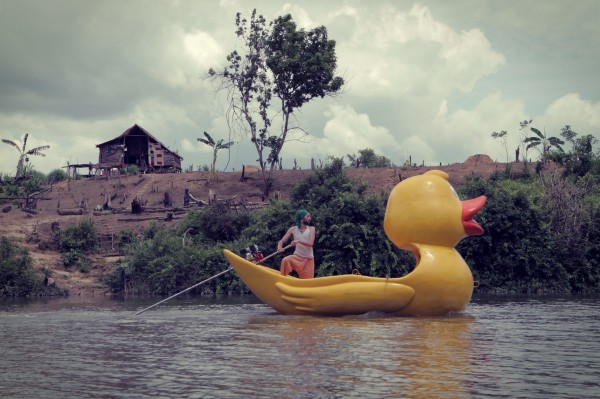 “We were looking for a river journey through the jungle and therefore we were thinking of the Mekong River and somewhere around Laos, Cambodia or Vietnam; the old Indochina,” explains Erik Verheijen, Head of Production at Wieden+Kennedy Amsterdam, adding that potential South American filming locations were shelved for a future production.

“Cambodia has a jungle that is not the typical example that you find in tourist magazines,” adds Bas Welling, an executive producer at Wefilm: “Vietnam was also considered but for this project it would still be too touristic and accessible.”

The production team faced an initial challenge getting the rubber-duck boat to Stavros’ start point in the jungles of the Ratanakiri region of north-east Cambodia. From there they followed the Greek adventurer for five days as he made his way home.

We started all the way in the northern part of Cambodia in a very remote area where few Westerners ever go, and followed down the river to make our way to Phnom Penh, the capital.

“We started all the way in the northern part of Cambodia in a very remote area where few Westerners ever go, and followed down the river to make our way to Phnom Penh, the capital,” Verheijen comments.

Keeping the rubber-duck boat supplied with food and water for Stavros was tricky at times. The environment made access a challenge and the crew approached on a small wooden boat, often having to get into the water to push the boat over rapids.

“There's no light in Cambodia on the street or on the water and helicopters are not allowed to fly at night in case of emergencies,” says Welling: “As soon as the supplies were organised by boat the crew had to go upstream back to the base, but by then the water was so high that they were in it up to their necks!”

Sleeping in hammocks, rationing fresh water and dealing with mosquitoes as well as the heat and humidity of the Cambodian jungle, all became part of the experience for the crew too. “The remoteness of the location meant that there were no hotels or lodging available, so it became a camping trip!” Verheijen finishes.

To find out about Heineken’s Dropped Alaska shoot click here.