Dutch production company Wefilm travelled to Morocco to film the latest instalment in Wieden+Kennedy’s Dropped digital campaign for Heineken. New York-based photographer William Englehardt was given the task of transporting a giant block of ice to a desert party. 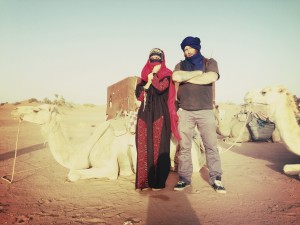 Preparing the block of ice for the shoot proved as much of a challenge for the production team as Englehardt’s later attempts to transport it once he arrived in Morocco. Initial problems creating a thousand-kilogram ice block that was big enough in fact forced a day-long filming delay when initial plans didn’t work out as hoped and the team - including servicing company Ali 'N Productions - needed a back-up at short notice.

“We would need a container for a thousand litres of water, and we would put that in the freezer,” explains Wefilm producer Bo Polak: “The only thing was where to find this container? It was nowhere to be found in Marrakech and something had to be made. It would be made out of wood with agricultural plastic on the inside.”

Once filming began, Englehardt was told his challenge was to take the ice block to a mystery desert location. Beginning in Marrakech, he travelled to M’hamid in the east of the country using different modes of transport including a tricycle, a camel and a miniature hovercraft, the rapidly-melting ice block always in tow.

“We started the shoot in Marrakech and made our way through the Atlas Mountains into the desert,” adds Hugo van Woerden, a Copywriter on the shoot for Wieden+Kennedy: “The great thing about the location was such varying degrees of scenery – a bustling city, a barren mountain and a hot and dusty desert – were all in relatively close range.”

Follow the links to find out about Heineken's previous Dropped shoots in Alaska and Cambodia.