Sci-fi feature Elysium filmed partly on location in Mexico City, doubling the region for a dystopian Los Angeles. The film is set 150 years in the future on an Earth divided between a poverty-afflicted surface population and an orbiting luxury space station. 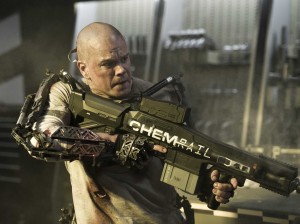 Filming took place in Mexico City’s Bordo Poniente, which was one of the world’s largest landfill sites until its closure in late 2011 after Elysium had wrapped.

“It was one of the most difficult shoots of my life,” star Matt Damon told the BBC: “Not just because of the heat, the dust and the human waste that was all around us, but because there is a whole community, some two-and-a-half thousand people, who are living in the dump. They live there and they die there, and they don't leave.”

“We could have green-screened the entire thing,” director Neil Blomkamp added to the outlet, “but I wanted there to be a real discrepancy in the film between rich and poor. So we're not manipulating the audience in any way - the poverty is completely real.”

Scenes set in the space station Elysium were filmed on location in Vancouver in British Columbia, where Blomkamp is based.