Western drama series Hell on Wheels has returned to film in Calgary, doubling the region for mid-19th Century US locations. The show’s season premiere comes shortly after Alberta’s call for studio development proposals for Calgary. 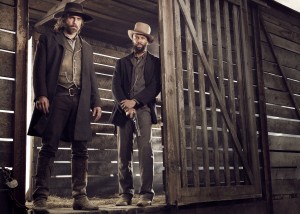 Hell on Wheels is set in the aftermath of the American Civil War in the 1860s. The story follows a former Confederate soldier as he works on the First Transcontinental Railroad while tracking down the Unionist soldiers who murdered his family.

Alberta has called for proposals for a dedicated studio facility for Calgary and has pledged to support the chosen development plan with a CAD5 million investment. Private sector companies have until 27 September 2013 to submit proposals.

It’s good working in Calgary because our crew is so experienced in the Western genre.

“We know our film, television and digital media industry is an intrinsic part of Alberta’s culture and economy,” said Heather Klimchuk, Minister of Alberta Culture: “To continue to grow this industry in a sustainable way - and optimise public support - we need our private sector partners to step up to the challenge to successfully build and operate their film studio without long-term public support.”

Alberta’s production industry has generated CAD400 million in provincial economic activity over the past five years, according to government figures. Production support is available through the Alberta Media Fund.