Guinness filmed on location in Tahiti and Hawaii for its new spot Surge. The 20-second commercial captures the underwater drama of an ocean swell and draws a parallel with a surge of Guinness, in the process recalling the brand’s classic Surfer spot from the late 90s.

Finding the right filming location to capture the perfect surge involved extensive transcontinental research and was a learning curve for the production team.

“At the start of this production my knowledge of surfing was extremely limited!” explains Creative Production Partner Kirstie Johnstone: “Many phone calls to many people soon changed that, from discovering that ice-cold water off the west coast of Scotland or Ireland doesn’t provide ideal shooting conditions [to] a concern over the available light."

The biggest challenges were not getting slammed by massive amounts of water on the bigger days and not getting ripped to shreds on the smaller days.

“The water in Portugal is incredibly silty," Johnstone adds: "Mavericks in California (a well-known surfing location) has dark, dense, murky water - again not ideal. South Africa, aside from the obvious concern of sharks, offered limited other options due to it being the end of their dry season at the time of the shoot.” 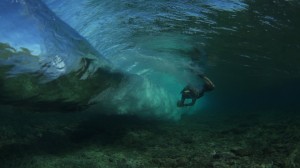 Tahiti proved the ideal choice as the water was clear and more accessible, and the rolling waves were more frequent. Hawaii offered sand bars and waterfall locations.

Filmmakers Daren Crawford and Scott Mortensen worked with underwater photography specialist Brian Bielmann. Crawford also filmed using a much larger Phantom rig that was secured in an underwater housing and tethered to a base unit on the beach.

“For Brian, the biggest challenges were not getting slammed by massive amounts of water on the bigger days and not getting ripped to shreds on the smaller days when the amount of room to move between the reef and the waves was very limited,” Johnstone adds: “Both situations were equally dangerous.”