Filmmaker Ron Howard filmed extensively on location in the UK for his new motor racing feature Rush. The true-life story focuses on the intense rivalry between drivers James Hunt and Niki Lauda during the 1976 Formula One World Championship. 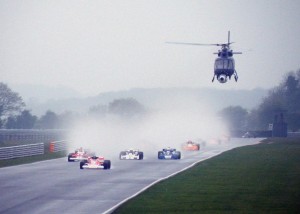 Howard picked several UK racing tracks for the shoot and these locations were dressed for the mid-70s time period, while also doubling for famous circuits around the world. Filming focussed on Brands Hatch in Kent, Snetterton in Norfolk and Cadwell Park in Lincolnshire, all of which are managed by MotorSport Vision.

“The biggest challenge was dovetailing the filming of Rush with set-up for a major international motorsport event – DTM (German Touring Car Championship),” explains Mike Groves, Circuit Manager at Brands Hatch: “For example, the filming helicopter needed to fly quite close to the cranes being used to construct hospitality structures for the teams.

“Similarly, the film crew had to carefully manage their camera positions to ensure these hospitality structures were not captured in shot.” 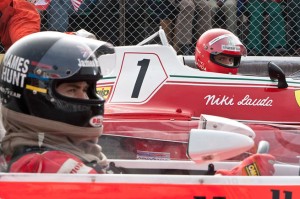 One of the hospitality suites actually ended up being used for an interior scene in fact set in a briefing room at Germany’s Nurburgring, which involved extensive dressing to recreate the 70s setting.

Changes to the tracks themselves remained cosmetic approaches to recreating the period and sometimes wetting the track or indeed re-scheduling shots if they had rain for scenes where dry conditions were needed.

Track Hire Manager Ian Berry praises Location Manager Jonah Coombes for easing the process: “He understood my commercial requirements and dealing with him was always a positive experience. Running race tracks is not a simple business but he made sure he understood how we operated, why, and what he needed to do to achieve his goals.”

“As [Formula One] films are so rare the opportunity doesn’t come up [to host them], which makes it all the more satisfying that Cadwell Park could be involved at all,” says Jon Rush, Circuit Manager at Cadwell Park: “We usually get TV’s 5th Gear filming here a few times per season and more regularly the circuit is used for magazine articles and auction catalogues.”