Television period miniseries Serangoon Road was filmed on location in Singapore for HBO Asia. Set in mid-1960s Singapore, the show is a ten-part detective story set against the backdrop of social upheaval as the country begins to emerge as an independent republic. 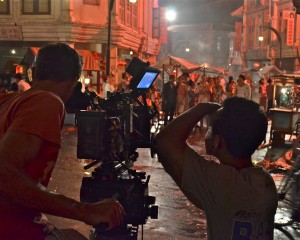 Singapore is now a modern metropolis and this restricted the locations that could be made to look like the city of the mid-60s. Filming took place at the city’s Infinite Studios, which has a back lot on the Indonesian island of Batam, a 40-minute ferry ride across the Singapore Strait. Infinite Studios worked with series creator Paul Barron and Australian production company Great Western Studios, while additional support came from ScreenWest in Australia.

“On the back lot we had an extensive ‘Chinatown’ streetscape to recreate iconic Singapore streets such as Bugis Street, and constructed a warren of back alleys,” explains Infinite’s producer Nick North: “We shot a number of key interiors in the studio, including the main detective agency.”

Outside the studio, the production focussed on expatriate locations and the preserved merchant shop houses of the Joo Chiat neighbourhood, with set dressing being the only changes made by the production team.

On the back lot we had an extensive ‘Chinatown’ streetscape to recreate iconic Singapore streets such as Bugis Street, and constructed a warren of back alleys.

“Various locations were used in Singapore including Raffles Hotel, black-and-white homes and so on,” Barron comments: “The locations were chosen for period authenticity and, of course, access.”

“We also used locations on the island of Batam, Indonesia, where the studios are located, particularly for village scenes - to recreate the Kampongs of Singapore in the 60s - and for rural settings,” North adds.

“Singapore has a wide variety of settings and locations cutting across different cultures and historical periods that could also convincingly double for other cities,” North concludes: “As with any project a good Location Manager will be able to help tap this potential.”