Volvo Trucks filmed on location in Spain to build on its reputation for attention-grabbing ‘stunt’ commercials. In one spot the company put a hamster at the wheel to demonstrate steering sensibility and in another the vehicle’s high clearance is confirmed using a brave technician’s head. 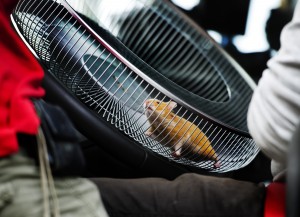 Smuggler worked with Volvo on The Hamster Stunt, which was filmed on location at the Tres Cuñados quarry in Ourense in north-west Spain after an extensive scout.

“We were looking for a quarry which would offer the most complex environment for creating a real run test track for the trucks - and the hamster!” explains Gordon Mackinnon of servicing company Goodgate Productions.

The team fastened a circular hamster cage to the steering wheel and the driver simply baited the rodent – named Charlie – to walk left and right on the wheel. This was enough to manipulate the truck’s sensitive steering and navigate the treacherous quarry roadway.

“The weather was a challenge, as was making sure the hamster was doing alright, the risks of the terrain and of course making sure ‘Charlie’ and the driver co-ordinated their efforts as well as possible,” says Alex Blidner of agency Forsman & Bodenfors.

"We collaborated with CoyotAir from Madrid [for aerial shots]," Mackinnon adds: "They managed to negotiate the terrain incredibly, dipping in and out of the quarry pit to get some incredible footage as well as being an important prop on film.

"Simple things like finding hotels for 70-odd people in what is quite a remote, rural region [was a challenge]. Safety was obviously a prime concern and just generally supervising the activities of a large, multi-camera film crew.” 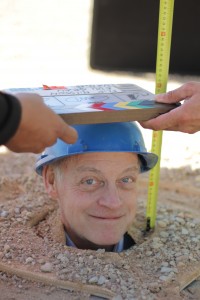 Filming had to be carefully co-ordinated with the daily quarrying operations on the narrow tracks.

Volvo’s Technician commercial was filmed on the other side of the country in Teruel and here the firm worked with Swedish production company Folke Film as a different director was involved. The spot demonstrates the high clearance on Volvo trucks by burying a technician neck-deep in the desert and precision-driving over him.

“Safety was the first priority,” Blidner continues: “There was lots of prep, drawings, measurements and weight calculations done. Then we dug a hole and built a box inside. With a basic piano stool we got the last trim of the height for his head.”

"We were filming on location for a couple of days and had the special reinforced box for the technician," adds Pere Cavanillas of servicing company Story We Produce: "It's a good location - I would recommend it, especially when you have a small crew."

Volvo Trucks has a track record of using inventive methods to spotlight its vehicles’ features. The firm recently focussed on the strength of its tow hook by hanging a truck over Sweden’s Gothenburg Harbour and perching the company president on the bonnet to deliver a monologue to a helicopter.

In 2012 the company headed to an unopened highway in Croatia to carry out a slackline stunt between two moving trucks in a demonstration of the vehicles' precision driving.