Marvel’s action sequel Thor: The Dark World filmed on location in and around London and was based at Pinewood Shepperton Studios. Stage work involved building the grandiose sets of Thor’s home Asgard, while the production focused on the logistics of filming central London.

Studio work involved building a host of enormous sets. A coronation chamber was nearly 20 weeks in the making, while an Asgard street took nearly four months to construct and was the largest build Marvel had ever put together. 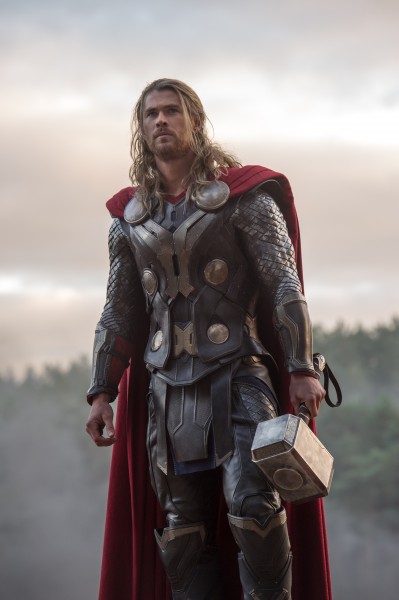 “It’s really like the old days of cinema,” comments co-star Natalie Portman: “The sets are incredible and you walk on and you think ‘Wow, we’re making a movie’. The scope is just so grand. It’s fun to be on that kind of set and see the craftsmanship that goes into it.”

For the location filming elements of the shoot, the production focussed on central London, which was an important part of the script from early on. Bourne Wood in Surrey and Iceland offered contrasting looks for the fantastical realms that feature in the story, while an aerial team spent three days filming Norway’s arctic Lofoten Islands as background plate shots for Asgard.

“The main disused derelict factory in the film is the Old Vinyl factory in Hayes [in west London],” explains Supervising Location Manager Emma Pill, “We had to undertake a substantial clean up prior to the crew arriving due to health and safety issues, only to make it look rundown again for the film.

“Another location we had to find was a warehouse that was large enough to take a cement mixer that floats and spins in the air! This had its own logistical problems. Firstly we had to find a space that was visually interesting and secondly it had to be large enough to fit the special-effect rig that actually raised the cement mixer in the air. We finally found a warehouse to fulfil this brief in Wembley.”

Director Alan Taylor scouted central London in early 2012 and the decision was made to set the film’s final battle at the Old Royal Naval College (ORNC) in Greenwich. The shoot had to be scheduled around the Queen’s Jubilee celebrations and the London 2012 Olympics.

Once we knew we wanted to go to Iceland we had to schedule it as early into the shooting schedule as possible to avoid the snow cover.

“The ORNC has the most beautiful architecture and it is visually very interesting,” Pill adds: “Lastly it also had to be practical. There were many shooting days required for the final battle and we needed a controllable location for a substantial period, which Greenwich was able to offer us. In addition to filming at Greenwich, we built part of a replica set of the location for some of the scenes where the buildings needed to be destroyed.” 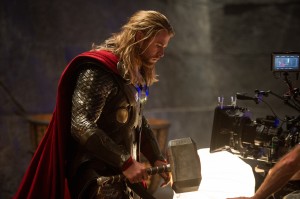 The production team also spent a week filming on location in Iceland, which became Svartalfheim, home to the story’s villainous dark elves. Shooting took place a couple of hours outside Reykjavik.

“Once we knew we wanted to go to Iceland we had to schedule it as early into the shooting schedule as possible to avoid the snow cover,” Pill recalls: “We managed to shoot there in early October, having been advised we should be clear. However, Iceland had one of the earliest snow falls in 2012 and the crew woke to find a dusting of snow across the landscape which made the day more interesting!”

“Shooting in Iceland ranks high up there in my lifetime great experiences as a cinematographer,” explains cinematographer Kramer Morgenthau: “It was absolutely stunning. We felt like we were shooting Lawrence of Arabia, but with black sand, and we were certainly inspired by that widescreen desert look, where the characters are very tiny in the frame and they’re a part of this huge world around them and the environments themselves become as much a character as the actors themselves.”

Marvel has begun shifting big-budget production in a big way from the US to the UK. Whilst the first Avengers movie filmed most of its studio work in Albuquerque, New Mexico, the next film will shoot at Pinewood in 2014. That follows on from Marvel’s new potential franchise-starter Guardians of the Galaxy, which also filmed in London. Captain America: The Winter Soldier is the only current exception, having made the unusual decision to film mostly in California, despite shooting its first instalment largely in the UK.

The UK has major international appeal because of its competitive filming tax credit and studio infrastructure. Producers also have easy access to other European countries, as well as Iceland, which offers great visuals and a competitive filming incentive of its own.