Dolphin Tale 2 has started filming on location at the Clearwater Marine Aquarium in the city of Clearwater on Florida’s west coast. The movie is a sequel to the original family drama Dolphin Tale, which was a huge success in 2011. 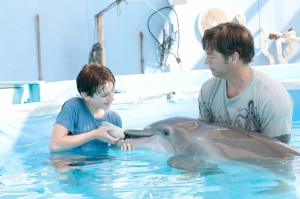 The first Dolphin Tale told the true story of injured dolphin Winter, who was nursed back to health with a prosthetic tail. It made nearly USD20 million for the local economy and was also a big box-office hit.

Clearwater Marine Aquarium will be closed off to the public for much of the shoot.

“When you have a major motion picture shown all around the world about your organisation it's a rarity. It's huge. It's changed the landscape for us,” Clearwater Aquarium head David Yates told ABC Action News: “So even though things slow down for a couple of months, the impact is huge. But also, the movie company is spending millions of dollars in town just for filming.”

The film is receiving a USD5 million incentive payment to shoot locally in Clearwater and annual visits to the aquarium itself have reportedly quadrupled since the release of the first film. Taking this impact into account the state of Florida estimates the legacy of both films could deliver USD2 billion over a five-year period.

When you have a major motion picture shown all around the world about your organisation it's a rarity.

Florida offers a filming incentive of up to 30% but its long-term fund needs stronger government support. Spy drama Burn Notice – Florida’s only long-running English-language TV series – recently came to an end after a seven-season run and the state’s future as a major production hub is now uncertain.