A top executive at HBO has been considering Game of Thrones’ production legacy in Northern Ireland. The hit fantasy drama is filming its fourth season from its Belfast base and HBO’s executive vice-president Jay Roewe praised local enthusiasm for the production.

“There is a business-friendly environment here where we feel secure, we feel safe and we feel support,” Roewe told the Irish Examiner, “and on top of everything else there is a genuine enthusiasm with people wanting to help be part of a successful business."

“I can tell you unequivocally right now people are already asking us about Northern Ireland, have already made enquiries as to how it’s going for us here and it’s on the radar, so the word is already getting out," he added.

Game of Thrones has been based in Northern Ireland for three seasons and a fourth is now filming, while Iceland and Croatia have also been used extensively as filming locations. Roewe also commented on the legacy of a show that’s become a benchmark for high-end television production.

There is a business-friendly environment here where we feel secure, we feel safe and we feel support.

“We have had an opportunity to work with the local people here and there is a great educational situation going on here where they are learning how to do great productions and, when we eventually leave, the people of Northern Ireland will be able to carry on with other productions in the future at the same quality level that we are working on with Game Of Thrones,” Roewe added. 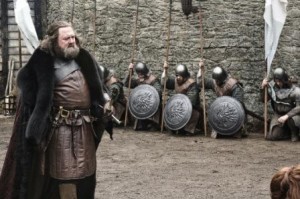 Northern Ireland has been attracting more features and television productions since Game of Thrones arrived. The head of Northern Ireland Screen recently said production spending in the region should double over the next four years.

Game of Thrones is a good example of the long-term benefits of high-end television. Northern Ireland’s production industry has grown around the show’s massive success in a way that would not be possible purely by hosting the occasional big-budget feature film for a few months at a time. Given that high-profile filmmakers are being attracted to direct key episodes of the series, the local industry is getting terrific exposure as a highly practical filming location.