Chris Hemsworth, star of new Marvel sequel Thor: The Dark World, has praised the UK’s location filming opportunities. The movie shot mostly at Shepperton Studios and on location in and around London, marking a production shift for Marvel. 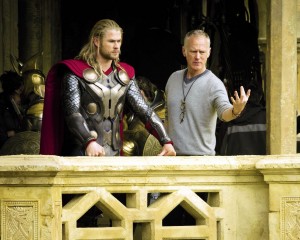 “The interesting thing about Hollywood,” the Guardian reports Hemsworth as saying at a weekend press conference, “is that I don't know how much is shot there now – I know once upon a time it did, but it's predominantly sets and studios. The nice thing about here [in the UK] is that there are brilliant studios, but there are beautiful locations to take advantage of and I love the aesthetic this film has because we get to see London.

“Most of these films are set with New York or American cities as background and I love that difference.”

Natalie Portman, Hemsworth’s co-star in the Thor movies, added that California has become tricky to discuss as a filming location because productions “don’t really shoot in Hollywood at all”.

The UK has become a major location filming competitor for the US, offering world-class studio facilities and a competitive filming incentive programme. Marvel recently wrapped Guardians of the Galaxy at Shepperton and Longcross, and The Avengers: Age of Ultron will also film at Shepperton in 2014. That said, Marvel is also filming extensively in Los Angeles for Captain America: The Winter Soldier.

The interesting thing about Hollywood is that I don't know how much is shot there now – I know once upon a time it did, but it's predominantly sets and studios.

Los Angeles has made small headway in the past three months, with a 10% increase in location filming, but this figure is still far below what the city needs to accomplish to reclaim its position as a production centre for feature films.