Filming the event bid: On location with Caroline Rowland and New Moon

Caroline Rowland set up her production company New Moon in 1996. Over the years the firm has supported bid campaigns for events like the London 2012 Olympics and the Sochi 2014 Olympic Winter Games, which have involved location filming around the world.

Producing film campaigns to support major event bids presents many of the location filming challenges associated with shooting regular commercials, but the key difference is that the locations themselves come first.

“The curious thing is that the location drives the narrative, when usually it’s the other way round,” Rowland explains: “Also, I usually find that I’m given a lot of freedom to present a place from an outsider’s perspective. For recent work that I’ve done in Istanbul and Lima, I was told that, essentially, I was the audience and that I should tell them what I wanted to see as an outsider looking in. That approach leads to a more introspective approach that can work quite well.”

Rowland’s work supported the bid that secured the 2014 Olympic Winter Games for Sochi on the coast of the Black Sea in south-west Russia. She describes the experience as “very challenging” because at the time of filming little of the infrastructure was in place for the actual event and major regeneration was needed.

The curious thing is that the location drives the narrative, when usually it’s the other way round.

Initial familiarisation trips are arranged by the bid committees to help Rowland and her team decide which filming locations to use for bid-supporting shorts. Local authorities present a list of what they consider to be the most eye-catching locations and then Rowland usually suggests additions of her own, based on advice she’s had from her own research. 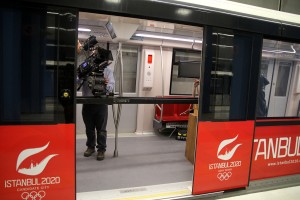 “Going off-map during the recce can also be a good way of seeing how open and transparent the hosts are,” Rowland says: “Different countries respond in different ways. The Qataris were extremely flexible in terms of what we could see and visit (and the country ended up winning its bid for the FIFA 2022 World Cup), as were the Koreans when we spent six days on a recce in PyeongChang for the city’s successful 2018 Winter Olympics bid.

“Korea was in fact one of the best visits I’ve ever done. We were shown all the best parts of the city – including a great range of restaurants and karaoke bars – and we really fell for the place. It was an experience that certainly informed the finished film.”

In contrast, Rowland’s experiences of places with more established filming infrastructure can be challenging in different ways as there’s often an established – and potentially lengthy – process involved with arranging permits and access to certain locations.

Differing cultural approaches to religious iconography and shifting views of history are regular “points for discussion” for Rowland and local authorities when filming on location.

Going off-map during the recce can also be a good way of seeing how open and transparent the hosts are. Different countries respond in different ways.

“Discussions are still common about how religious sites and images of features like Islamic architecture and Christian churches are presented,” Rowland considers, “but the approach towards more general historic sites has shifted.

“In Asia and the Far East in particular, only a few years ago local authorities would shy away from images of old buildings, or anything that was perhaps in a state of disrepair or crumbling and carrying a sense of impermanence. Attitudes have shifted over the past decade and now there’s a greater willingness to embrace history more openly.”