Written by Murray Ashton on Nov 19, 2013. Posted in Interviews

Filming on location in Bulgaria with Executive Producer Christopher Bojilov

Christopher 'Fori' Bojilov trained as a computer engineer and began his career in post-production in 1997. He made his first feature in 1999 and later expanded to commercials as well, becoming an Executive Producer with Bulgaria Film Services. In 2005 he set up service company Filmmaker. 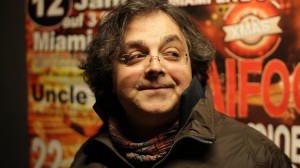 What can you tell me about Bulgaria as a filming location?

Filmmaker shoots mainly in Bulgaria, but I have strong connections to the Balkans, as well as with western European countries. Bulgaria is a great country for filming and the good thing is that it has the variety of locations and different landscapes within short distances. The country is small, but there are different types of mountains, great coastal areas, rivers and lakes. You can even make a fake desert here.

Bulgaria has one of the biggest (and oldest) film studios in the Balkans, Nu Boyana, and several other complexes offering big stages and rental services. Here you can find filming equipment, great post-production, and effects experts. But it is not only the hardware, but the people who make the great things happen and you can find one of the most skilled and experienced crew bases in Eastern Europe.

What locations are most commonly used by film and TV crews when they film with you in Bulgaria?

It’s important to note that Bulgaria is still the cheapest (but thoroughly professional) place to shoot in Europe and can find almost everything that you need for a filming location. The weather is great, with snowy winters, hot and sunny summers and a colourful springtime. We have big rivers (not just the Danube), great white sandy beaches and rocky coasts (we can double for Scotland), as well as caves, oriental-looking villages with unique architecture, ethnographic complexes and historic sites dating back to the Thracian times.

It’s important to note that Bulgaria is still the cheapest (but thoroughly professional) place to shoot in Europe and can find almost everything that you need for a filming location.

What are the more unusual locations in Bulgaria that our readers would not necessarily associate with the country?

We have a Roman theatre, a New York back lot and desert locations. We also have one of the biggest sea ports on the Black Sea. There are great Roman sets with buildings, squares and a gladiator arena, and also old communist military bases where you can perhaps use real tanks perhaps. We also have scary, semi-destroyed heavy factories, mines and medieval castles.

There are no ‘impossible’ locations here. Some are a bit hard logistically, but once you have permission (and this is part of my job) it’s great and safe to shoot in airports (both on the tarmac and on real planes) or on trains and on the subway. Sofia’s metro is really nice!

What types of production do you work on most commonly?

My company works mostly on commercials, but in Bulgaria has hosted several big features like 300 – Rise of an Empire, Marcus Nispel’s Conan the Barbarian and both Expendables sequels. Bulgaria is often visited by many acclaimed directors and producers, as well as many of the world’s biggest movie stars.

The main goal when shooting here is to make you feel like you’re at home. There are friendly people and there’s a safe environment. The difference is maybe that we have the most beautiful women here and you can smoke in the restaurants, bars and clubs. There is fast, free WiFi almost everywhere.

Which producers and production companies have you most enjoyed working for over the years?

We are used to working with some of the biggest European production companies. In Europe the longest flight to Sofia is three hours. I like the discipline and the crazy creative of the Germans – Czar, HKF, Tempomedia, Film Domaene, Hot Dog and Sterntag. They usually come with big scale projects, as well as the Spanish, like Lee Films, Propaganda, Alamo, Tesauro, Smile, Agosto and BUS.

Bulgaria has one of the biggest (and oldest) film studios in the Balkans, Nu Boyana, and several other complexes offering big stages and rental services.

We often do services for various productions from Stillking, we used the beauty spots for Wanda (France). We’ve done Christmas in August for Bare Films (UK), or running through the airport for Filmmaster. We’ve serviced almost every European country including Russia, Czech, Hungary, Poland, Netherlands, Romania and Ukraine.

Location and crew insurance - there are usually set costs for Public Liability cover for film units and costs for insuring locations. Can you tell us about location insurance and possibly examples of costs in Bulgaria?

Most of the biggest international insurance companies have offices in Bulgaria and you can do almost every type of filming insurance here, including crew, equipment and third-person liability. The only thing that is uncommon locally is the weather insurance.

What would you recommend crew and cast do to have fun in Bulgaria?

I’d suggest visiting some historical places. There are the cities of Plovdiv, Rousse and Varna, some of the best summer resorts on the Black Sea like Golden Sands, Sunny Beach and the old coastal towns Sozopol or Nessebar. We also have some of the best winter resorts in Eastern Europe, such as Bansko, Pamporovo or Borovetz.