Irene Paris filmed on location in Iceland for a Christmas-themed spot for French supermarket chain E.Leclerc. The commercial showcases the ease of price comparison technology against the backdrop of a frozen Alps landscape.

“The location is the glacier Langjokull, about a three-hour drive from Reykjavik,” explained Jean-Michel Paoli of servicing company Truenorth: “This location was chosen at the time because we had snow in October and also a location that could play the Alps. 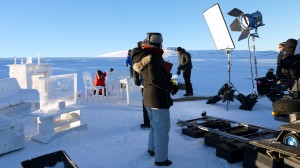 “We could do this commercial in the middle of the summer since we have snow on the glacier in Iceland all year around. The good thing about it compared to any glacier in Europe is that it’s accessible with a four-by-four jeep. We had the location, the right budget and the right people to handle this project.”

Various small sets and a partial ski lift were built on the glacier itself, and a hole had to be dug for a Jacuzzi shot. A final scene involving a Christmas dinner in a swaying cable car was built as a set in a warehouse facility. The production team also filmed an additional spot on a set they built in an abandoned power plant.