Production company PPI China and French actress Sophie Marceau have filmed on the streets of Paris in a new spot for Citroen. The piece compares the car’s driving experience to the luxury of a private jet flight as Marceau meets a suave businessman at the airport. 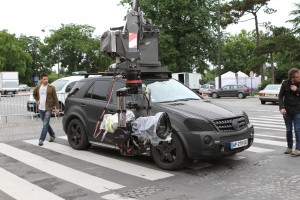 Filming took place in central Paris and at La Bourget airport in the north-east of the city. The production was rained on every day, but that caused few problems other than some minor schedule changes.

“Shooting in central Paris is not easy but we managed it,” explains Nicolas Betrancourt of servicing company Nicocorp: “It's a question of time. The airport was friendly - you just need to erase planes’ registered numbers in post.”

Production support in Paris is available from the Ile de France Film Commission, while eligible features, TV shows and animation can access France’s filming incentive known as the Tax Rebate for International Production (TRIP). The programme is available throughout France and also applies to the country’s overseas territories.

France has a number of international partnerships in place designed to boost its domestic production industry and in 2012 filmmaker Luc Besson opened the Cite du Cinema studio facility. The complex offers nine sound stages north of Paris, as well as a film school designed to boost the regional crew pool.

Despite these developments, France faces stiff competition from other European production hubs like the UK. Tom Hooper’s musical epic Les Miserables filmed mostly on location at Pinewood Studios and in southern England, despite its French setting.