Smuggler headed to the hills of Costa Rica for a spot introducing the ultra high-definition quality of the new 4K Sony Bravia TV. The campaign - titled Four Times the Detail - shows a volcano erupting multi-coloured petals that waft into a nearby town. 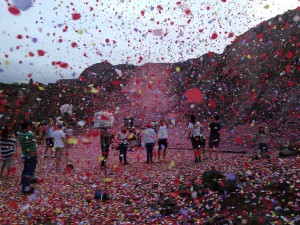 Indonesia and Iceland were among the global filming locations initially considered for the shoot, but the production ended up choosing two separate volcanoes in Costa Rica.

The team spent a day in the air filming aerials over the Rincon de la Vieja, one of the country’s best known volcanoes, before moving to the Irazu volcanoes – which offered accessible craters – and the small towns of Orosi and Pacayas. Sony’s F55 and F65 cameras were used to further enhance the ultra high-definition theme.

“As filming locations go, these are not the most popular areas to shoot in,” explains Gustavo Paris, an Executive Producer with servicing company LCA Productions: “In general people come to shoot in Costa Rica for its nature, vegetation, beaches, waterfalls and jungles. Those would be the more popular options. So we caused quite a commotion since those small towns are not that popular for shooting.”

Working with several tonnes of petals for the commercial’s central premise was a major challenge. Orders from local florists had to be placed well in advance of Costa Rica’s Mother’s Day celebrations to make sure there was enough at reasonable prices. Once delivered, the petals had to be transported in refrigerated trucks to keep them fresher for longer, and their usage had to be staggered over the four-day shoot.

A clean-up team cleared the petals after each scene, but as they were all biodegradable it wasn’t absolutely essential to find every last one.

“The locations were basically used as they were,” Paris finishes: “The only changes would be the installation of the special effects equipment to shoot out the petals and in some cases petal dressing before shooting on the location. Everything just revolved around the petals!”

To find out more about filming in Costa Rica read The Location Guide's interview with local producer Sara Rossi here.