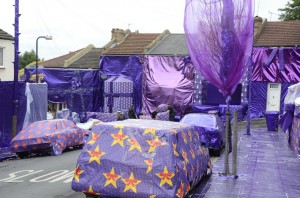 “We considered towns all over the UK,” explained Location Manager Eugene Strange of location management company Salt, “but when we came across Sladedale Road in Plumstead we felt the steep slopes and [the feeling that] it's not obviously London, made it an interesting choice of location. We were looking for streets on a slope with distant views beyond.”

The team worked with Greenwich Film Unit to negotiate with local residents, as the production needed to get the permission of a string of homeowners on the terrace to be able to cover their houses in wrapping paper for a week.

“Greenwich Film Unit were integral to helping us gain permission,” Strange adds: “They were party to the consultation process and then helped with road closures, permission for wrapping the trees, pavements and a unit base on a nearby park.”

The unit was in fact the first film office in London to be dedicated to a specific borough and offers production assistance in areas like location scouting, road closures and unit base set ups.

Greenwich is a hugely popular filming location as it offers a series of historic sites like the Old Royal Naval College that’s been used by movies such as Thor: The Dark World, Skyfall, The King’s Speech and Pirates of the Caribbean: On Stranger Tides.