Angelina Jolie has shifted location filming of her World War II feature Unbroken to Sydney in New South Wales (NSW), having completed scenes in Queensland. The film tells the story of US airman Louis Zamperini who survived weeks adrift at sea before being captured by the Japanese. 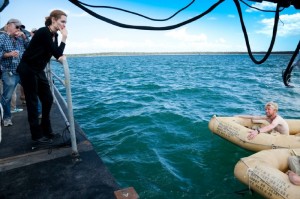 “The NSW Government welcomes Ms Jolie, her cast, crew and producers to our wonderful city for their first day of filming,” said New South Wales’ Deputy Premier Andrew Stoner: “NSW has a world-class film production and post-production industry. Films such as Unbroken further enhance our international reputation for excellence and innovation and contribute significantly to the State’s economy.”

Jolie will film in and around Sydney and will complete post-production work in the city. Location filming will also take place in regional parts of New South Wales.

The filmmaker has already spent time in Gold Coast in Queensland, where she filmed scenes depicting Zamperini’s weeks adrift in the Pacific when he was shot down with his crew while on a reconnaissance mission.

Films such as Unbroken further enhance our international reputation for excellence and innovation and contribute significantly to the State’s economy.

Australia’s 16.5% Location Offset filming incentive is designed to attract international productions like Unbroken, which is Jolie’s second feature film as director. Earlier this year the Australian Government launched an additional AUD20 million fund – known simply as The Incentive – that’s designed to sweeten the deal for big-budget shoots, but it’s not clear whether Unbroken benefited.

Hugh Jackman’s The Wolverine was one of the most recent high-profile international shoots to film in Australia and doubled Sydney for Japan. The production secured a generous one-off payment to film in the country.