From Dusk Till Dawn TV miniseries filming on location in Texas

A TV miniseries based on the Robert Rodriguez road-movie horror From Dusk Till Dawn is filming in Austin, Texas. Quentin Tarantino wrote and co-starred in the original 1996 film that followed a group of misfits fighting vampires in a desert strip club. 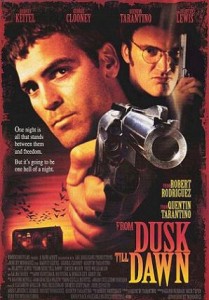 The TV series will expand the back stories of the characters – including two criminal brothers played in the film by George Clooney and Tarantino – while also exploring the mythology of the vampires.

“If the movie’s the short story, the series is the novel,” explained Rodriguez: “We have assembled an amazing cast and crew, and viewers can expect to be part of a wild ride when the series premieres on El Rey Network next spring.”

Rodriguez has experience with practically every element of the filmmaking process and runs his production operations from Troublemaker Studios in Austin.

Texas offers a filming incentive programme of up to 22.5% for feature films and TV shows, and earlier this year tripled its film fund to USD95 million for two years. Hit dystopian drama Revolution recently relocated to the state after a season filming in North Carolina and the rebooted Dallas is also shooting on location in its namesake city.

The state still faces competition from its neighbours. Oscar-tipped drama Dallas Buyers Club doubled New Orleans for Dallas, while new TV shows The Night Shift and Killer Women are both recreating Texas in New Mexico, where the television incentive has been lifted to 30% since the success of Breaking Bad.