New TV drama Looking has wrapped location filming in San Francisco. The eight-part series follows the lives of three gay men living in a changing city and shot in more than 40 different locations. 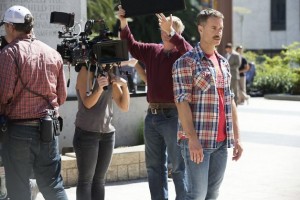 “We never wanted it to feel like picture-perfect San Francisco with a lot of shots of the Golden Gate Bridge,” said executive producer and writer Michael Lannan: “We do go on the Golden Gate Bridge, but we wanted to show the different communities and areas, to be in the Mission and the Haight and the Castro [city districts].”

Lannan added that there’s a presumption in Los Angeles that San Francisco is not a film-friendly city, but that Haigh in particular was keen to film there for the added authenticity of the story.

“I think in the end it’s not that difficult. There’s great crew up here. Films get made up here, so it certainly can be done,” Haigh continued.

We never wanted it to feel like picture-perfect San Francisco with a lot of shots of the Golden Gate Bridge.

San Francisco’s recent high-profile productions have included Woody Allen’s acclaimed Blue Jasmine and the HBO miniseries Hemingway & Gellhorn, which in fact doubled the city for locations all over the world. However, the city’s limited filming incentives and studio infrastructure means that stories set in San Francisco often spend just a few days on location in the city before doubling it elsewhere in the US or in Canada.

Looking premieres on HBO in January 2014.