Channel 4’s stylised TV drama Utopia has begun filming its second series on location in the city of York in northern England. The dark miniseries involves a group of disparate characters, a mysterious comic book that predicts world disasters, and a sinister criminal organisation.

Filming has started at a vacant building formerly occupied by chocolate manufacturer Terry’s. The site is being pushed as a filming location in the few months before it’s redeveloped. 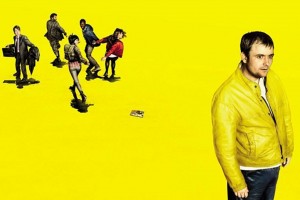 “York is a fantastic film-friendly city and the availability of the former Terry’s factory buildings is a huge bonus for us,” Location Manager Richard Knight told Newsquest Media: “Creatively, the location is spectacular and adds to the already high calibre of locations that we have identified in and around the city for filming.”

“York is already an extremely popular location for filming and the Terry’s factory site is a real gem of a location with strong architectural character and a rich heritage,” added Chris Hordley, Creative England’s production liaison manager for Yorkshire.

Northern England has become a popular filming location for British television. Production companies often seek new visuals, but just as often northern locations are doubling for London, as they lack the logistical constraints of a shoot in the crowded capital.

The Yorkshire area will also soon double for Cornwall in a new TV miniseries of Jamaica Inn, a dramatic mystery set in 1820. Production will be based at North Light Studios in Huddersfield.

York is a fantastic film-friendly city and the availability of the former Terry’s factory buildings is a huge bonus for us.

“We are finding wonderful locations, full of variety, offering us huge possibilities for this adaptation of Jamaica Inn,” said David Thompson, a producer on Jamaica Inn with Origin Pictures: “We also love working with the Yorkshire crews who we have found to be so dedicated and passionate about their work.

“Screen Yorkshire has been really supportive and is proving to be a major force in the British film industry.”