London-based production company Man+Hatchet filmed on location in an Estonian basketball stadium for a new animated commercial for well-being brand Withings. A hundred naked people were animated for the spot by taking 2,000 still photos from the stadium ceiling.

The production team spent five days filming in the basketball stadium in the Estonian capital Tallinn, taking the pictures from a rig mounted on a walkway just below the building’s18-metre-high ceiling. A Phase One IQ160 camera was used to take the photos, which were then digitally stitched to create the animation.

“With our brand growing globally we commissioned this campaign to increase awareness and build excitement around the brand for the rush of shopping at Thanksgiving and Christmas,” said Cedric Hutchings, CEO of Withings. 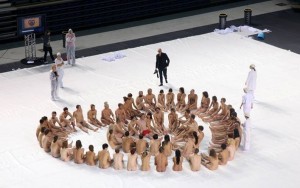 The shoot was serviced by Tallinn-based Munchhausen Production, previously known as Grillifilms EST.

Tallinn is home to nearly half the population of Estonia and offers a vibrant medieval city centre, parts of which date back 800 years. As such it’s one of the country’s main international selling points.

Production in the city mainly comes from neighbouring countries like Finland and Norway, as well as other European locations. Equipment is also easily imported when not available locally in Tallinn. Moving beyond the historic centre, remnants of the city’s soviet past also become quickly apparent, offering stark aesthetic contrasts within just a few hundred feet of each other.

To read about The Location Guide’s Estonia scout click here.