MJZ filmed on a rollercoaster in Holland for a new Carlsberg commercial celebrating the rush of football. The spot turns the rollercoaster into a visual metaphor as players, fans, stewards and commentators alike experience the highs and lows of the game. 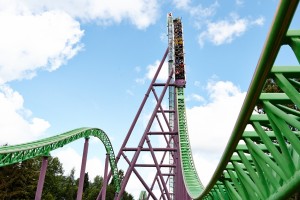 Director Juan Cabral put the Netherlands theme park Walibi Holland in his top-ten list of the world’s most exciting rollercoasters early in the scouting process and it turned out to be the most film-friendly option. The team negotiated access to the park’s Goliath rollercoaster ride outside the usual opening hours.

“The willingness of Walibi to accommodate our crazy demands was evidently quite exceptional for amusement parks - it was the only amusement park worldwide willing to co-operate in their busiest time of the year,” explained Dutch service company Bonkers.

MJZ made use of both of Goliath’s 32-seat rollercoaster ‘trains’ and hoisted a Carlsberg flag to the top of the ride ahead of filming.

We sent a train out full of supporters every four to five minutes during shooting hours, so the amount of people changing wardrobe at any given time was enormous!

“The most extreme location adjustment was allowing the extras to have props on the ride,” Bonkers added: “During normal operation hours visitors must even remove their glasses - under supervision of our stunt co-ordinator we were allowed to let extras dressed as sports photographers with full camera kit on the ride, with rigs with Arri Alexa & Red Epic cameras bolted to the front and back end of the train.” 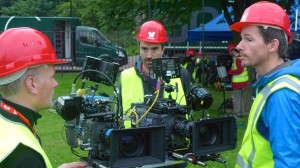 Two hundred extras arrived in the park at 3am on the morning of each shoot day and went straight into wardrobe and make-up before riding the Goliath for several hours of filming up until the park opened to the public. They then had to stay around the park throughout the day and get back onto the Goliath for filming into the night once the place closed to the public. Crew members stayed in tourist bungalows during the shoot.

“Wardrobe had a hell of a job constantly dressing the extras from a supporter of one Premier League team to the other, or any of the other roles they had to fulfil and having them back on time for the next ride,” Bonkers commented.

“We sent a train out full of supporters every four to five minutes during shooting hours, so the amount of people changing wardrobe at any given time was enormous!”