Stink filmed on location in Sao Paulo, Brazil, and Marrakech in Morocco for a new spot for the FIFA Club World Cup, which takes place in Marrakech from 11-21 December. The piece shows fans in cities around the world preparing to watch the competition in their homes and offices.

Sao Paulo and Marrakech in fact doubled for several different cities, with Marrakech the only location that actually appears as itself in the final spot.

“We shot Sao Paulo for Rio, London and Tokyo,” explained Director Andrew Lang: “We shot Marrakech for Agadir [on the Atlantic coast] and for Marrakech.

“We chose Sao Paulo because that is where Stink is based and because it offered the best combination of the favelas and high-rise inner city offices and apartments we were looking for."

Shooting the Marrakech scene in the souk was a no-brainer because of the fantastic light you get through the slatted roof.

"In terms of cast Sao Paulo was a good choice as there was a good pool of Brazilian actors for our favela scene, [as well as] Japanese-ancestry cast for our apartment scene and Caucasian cast for our London bank scene.”

Doubling Sao Paulo for Rio proved a challenge because the topography was different and the team needed a favela area on a hillside in a city that was largely flat. Lang also decided that he wanted real local people for a crowd scene rather than actors, so the place “became quite wild” during the shoot. 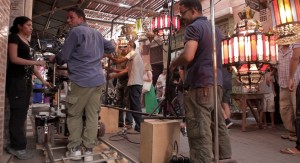 The London scene was also shot in Sao Paulo and needed an interesting skyline outside the window to give depth to the frame. Scenes set in Japan required buildings that were positioned close together in line with the real architecture of Tokyo.

“Shooting the Marrakech scene in the souk (open-air market place) was a no-brainer because of the fantastic light you get through the slatted roof, as can be seen in the opening shot of the film,” Lang adds.