Ron Howard’s new feature In the Heart of the Sea has been struck by flash-floods on location in the Canary Islands. Unseasonably heavy rain created torrents of water on the island of La Gomera, forcing a temporary halt on the movie that explores the origins of classic novel Moby Dick. 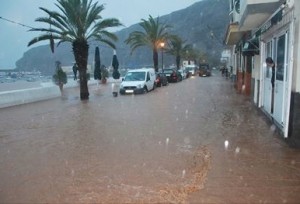 “There was a near-typhoon, which is very rare for that area,” producer Brian Grazer told the New York Post: “Ron had to shut down the production and get everyone out of there. Thankfully, none of the cast or crew were hurt.”

Set in 1820, In the Heart of the Sea tells the true-life story of the crew of the Essex, a Massachusetts whaling ship that was sunk by a sperm whale, leaving the stranded crew fighting for their lives. The story originally helped inspire Herman Melville’s classic American novel Moby Dick, while the new film reunites Ron Howard with his Rush co-star Chris Hemsworth.

The Canary Islands are part of Spain and are popular filming spots for productions from around the world. They can easily double for global locations and they offer a Special Zone Low-Tax Regime.

There was a near-typhoon, which is very rare for that area. Ron had to shut down the production.

Mainland Spain doesn’t yet have a formal filming incentive programme, but is nonetheless attracting big-budget productions. International shoots that attain co-production status in Spain can secure a tax credit through a European Economic Interest Grouping.

Ridley Scott’s biblical epic Exodus tells the story of Moses and is one of the latest big-budget productions to film in Spain. Large-scale sets are helping recreate the tale’s ancient-Egypt setting in Andalucia in the south of the country.