Comedy sequel The Inbetweeners Movie 2 will film scenes on location in Australia before moving back to the UK in January 2014. The first movie – made as a continuation from the hit school-set TV series – was the most successful British comedy in history. 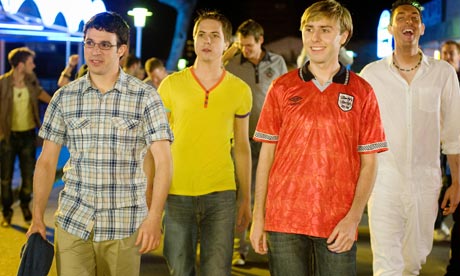 “We can’t say too much as we don’t want to spoil the jokes for you,” said series creators Iain Morris and Damon Beesley, who also wrote and are directing the sequel, “but what we can exclusively reveal is there will be kangaroos. And Australians. And possibly koalas. Oh and obviously [protagonists] Jay, Will, Neil and Simon providing they’re let into the country. Thanks so much for all your support - we’re hoping to deliver a film that you’ll enjoy even more than the last one.”

Starting life as a TV series, The Inbetweeners ran for three seasons in the UK before the first big-screen outing took the school-leavers on a holiday to Ibiza. The film was a huge hit, making GBP45 million from a production budget of less than GBP4 million.

Australia offers various filming incentives that could help producers Channel 4/Film4 and Bwark Productions reduce costs on location. The Inbetweeners has a large international following – it in fact spawned a much-derided US version – and the new film could help boost Australia’s profile.

We can’t say too much as we don’t want to spoil the jokes for you, but what we can exclusively reveal is there will be kangaroos. And Australians.

Angelina Jolie is also currently spotlighting Australia by filming true-life World War II biopic Unbroken on location in Gold Coast and New South Wales. The movie tells the story of downed US airman Louis Zamperini, who survived weeks adrift in the Pacific before then being captured by the Japanese.