Tunisia’s 2011 rebellion has impacted the country’s production industry and its chances of hosting the new Star Wars movie. George Lucas famously used the country as Luke Skywalker’s home planet – the desert world Tatooine – in the original Star Wars film in 1977. 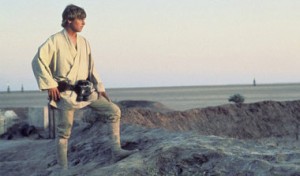 The rebellion in Tunisia went on to inspire the Arab Spring, which has resulted in widespread instability among Tunisia’s neighbours and continuing problems with extremist activity.

“The south was experiencing an economic boom,” said Ridha Turki, president of the National Chamber for Tunisian Film Producers, in an interview with Bloomberg: “Now, it’s a zone of parallel trade and transit for weapons and terrorism ... Disorder is an ogre that is scaring away foreign producers and investors.”

Star Wars will start filming in early 2014 and will be based at Pinewood Studios in London. Tatooine is likely to feature as a setting, given how integral it is in the Star Wars universe. A recent casting call for the movie stated that New Mexico is among the new filming locations and this would be a suitable alternative for the iconic desert world.

The south was experiencing an economic boom. Now, it’s a zone of parallel trade and transit for weapons and terrorism.

Director JJ Abrams is also reportedly set to film parts of the new movie in Los Angeles. He has admitted to being less than thrilled at the prospect of uprooting his family from California for longer than necessary.

In the past, Abrams has gone out of his way to shoot on location in California as much as possible, despite being faced with a limited state filming incentive programme that lacks the funds available elsewhere in the US and indeed internationally.