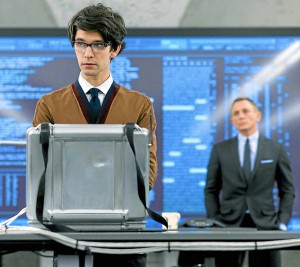 Pinewood is the historic home of the James Bond franchise and already has the 007 Stage that was originally built in the mid-70s for The Spy Who Loved Me. The new ‘Q’ Stage is named after the franchise’s gadget master ‘Q’, who Whishaw played in the most recent Bond movie Skyfall.

“We are thrilled that Ben took time out of his busy schedule to formally open ‘Q’ Stage,” said Pinewood Shepperton’s Andrew Smith: “Pinewood continues to invest in its infrastructure to ensure it offers all types of production the most state-of-the-art, secure and flexible stages possible.

“It is even more special to have [Bond franchise producers] Barbara Broccoli and Michael Wilson here to help celebrate and it underlines the very special relationship Pinewood and Eon Productions enjoy.”

Pinewood continues to invest in its infrastructure to ensure it offers all types of production the most state-of-the-art, secure and flexible stages possible.

Skyfall used Pinewood for a dramatic showpiece stunt involving a crashing Tube train and the production team also created a ‘frozen lake’ for the film’s finale, set in the wilds of Scotland.

Pinewood is currently seeking authorisation for a major expansion that will enable it to accommodate more productions in the coming years.