ACNE London filmed on location at The Forum building in Barcelona for a demonstration of the lane departure warning system in the Mazda 3. The spot shows broadcaster Johnny Vaughan driving the vehicle through a circuit that delivers an electric shock when he makes a wrong move. 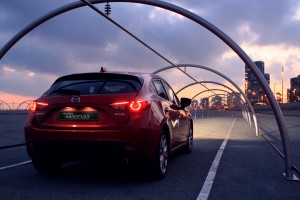 Filming locations were considered in the UK but the production team ended up choosing Barcelona for the better weather conditions and longer hours of daylight.

The Forum is an event hall and exhibition centre that also offers a wide outdoor space with an appealing 360-degree panoramic city view.

Inspiration for the spot came from the well-known electric wire game that buzzes when the player contacts it with a metal ring. The production team commissioned a series of giant metal hoops with the ring attached to the Mazda and set to shock Vaughan if he swerved too far off course.

“The agency, production company and local art director discussed different track designs,” said Toby Clifton, a producer with agency JWT London: “For a start it was important that it mimicked the shape of the buzz wire game as much as possible. But we also wanted the car to be able to pick up a decent speed without Johnny being electrocuted from start to finish!"

“While you can't get wood for love nor money in Spain right now, there's plenty of metal," Clifton added: "Each hoop was individually moulded into shape. We were all blown away when we saw what the art department guys had managed to build for the money. And we were assured there was a lot of maths involved."

Spanish filming locations have been prolific in recent advertising campaigns. Volvo Trucks scored a succession of viral hits in 2013 with a series of stunt commercials showcasing its various technical attributes, including Jean-Claude Van Damme’s Epic Split.