Production company MJZ filmed on location in South Africa with members of Congo’s stylish Sapeur community for a new piece for Guinness. The spot shows Congolese Sapeurs getting together in smart and flamboyant suits in a style showdown in their free time. 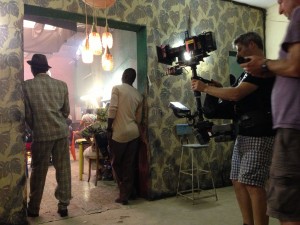 Durban in South Africa doubled for the city of Brazzaville in Congo in the spot, with the featured cast comprising real Congolese expats from the Sapeur community. The word ‘Sapeur’ comes from an elongation of the acronym SAPE (Congolese Society of Ambianceurs and Elegant Persons).

“Durban was chosen as the location, being a more tropical and lush destination,” explained Rudi Rossouw of Cape Town servicing company Stillking Films: “It’s not dissimilar to Brazzaville, with a more Central African feel. In addition, it has quite a substantial Congolese expat population.

“I’ve shot with director Nicolai Fuglsig previously in both Cape Town and Johannesburg, so he had a pretty good idea what to expect in those centers. He wanted something fresh and raw.”

The bar where the Sapeurs got together to show off their stylish clothes was set up in a building normally used as a clinic. Casting in Brazzaville turned out to be among the biggest challenge.

Durban was chosen as the location, being a more tropical and lush destination. It’s not dissimilar to Brazzaville, with a more Central African feel.

“It was quite a nerve wrecking process to put them on camera, get this to South Africa and obtain passports and visas in the allotted time frame. A few sleepless nights!” Rossouw added.

Sapeurs is just the latest distinctive campaign from Guinness. Recent spots have included the atmospheric Surge filmed in Tahiti and Hawaii and period piece The Clock, filmed on location in Czech Republic.