Sonny London took a prosthetic ogre to the Greek island of Crete to film a new spot for Thomson holidays. Simon the Ogre features a family man whose office existence has turned him into a literal ogre, but the fun of a Thomson holiday helps him relax and rediscover himself. 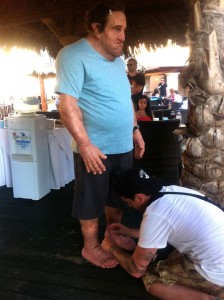 Five days of filming took place at the Sensatori Resort in Cherssonissos, Crete, with the production team having to schedule the shoot so as not to interrupt the guests.

“There had to be a great deal of co-ordination between ourselves and the hotel management who had to keep their guests informed of which areas would be out of bounds and for how long from the previous evening by written notice,” explained Maria Kopanou of Greek servicing company Green Olive Films.

“Of course having ‘The Ogre’ walking through the hotel to get to the set was quite an attraction and most guests came up to say hello to him. The actual resorts are so big that it can take up to ten minutes to get from one side to the other. On many occasions due to the heat and time constraints we had to get the ogre to travel via golf cart to the location, which as you can imagine got a lot of attention.”

Scenes set in an airport were originally scheduled for the UK but were relocated to Crete’s Heraklion Airport when the permissions didn’t come through in time in Britain. The production team also spent two weeks casting widely in Crete for English-looking extras.