Stink Digital filmed on location in the Douro Valley region of northern Portugal in a new spot for Japanese contact lens brand Miru. The production used an adapted remote-controlled OctoCopter camera rig to create a 720-degree view of balloons drifting through the countryside. 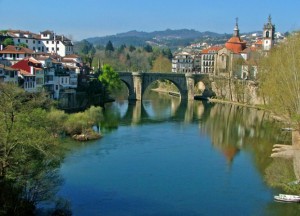 “We thought Douro would be really interesting with its meandering river and vineyards, which led into historical Porto city with its seven bridges and then out to the sea,” said Nick Page of Page International.

“We did a thorough recce all along the Douro River - which is very beautiful - and we found plenty of good location options for the part of the balloons flying along the river. The biggest challenge ended up being the search for the perfect house for the opening sequence with the girl.”

The OctoCopter itself comprised a flight platform and an electronically-stabilised camera unit, but this needed to be adapted to capture the 720-degree spherical footage they were looking for.

“We used six Sony NEX7 cameras,” explained Ben Keene of Cloud 12, who operated the OctoCopter along with Graham Tolhurst: “The development team at Stink Digital created a bespoke aluminium mount for them to sit on, angled in such a way that with the aid of wide angled lenses they would cover the sphere in its entirety.”

We thought Douro would be really interesting with its meandering river and vineyards, which led into historical Porto city with its seven bridges and then out to the sea.

The adapted camera rig was attached directly beneath the flight platform but needed to be launched and landed by hand as there was no room for any landing gear.

Transporting the unit from the UK was in fact one of the bigger challenges, as the Lithium Polymer batteries are heavily restricted on commercial airlines.

“It is illegal to take Lithium Polymer batteries on a commercial passenger plane if they are over a certain ‘watt hour’ capacity,” Keene added: “Our Octo batteries are extremely powerful and are classed under the Dangerous Goods Act when it comes to transporting them via civil aviation. We either have to source fresh batteries from the country we visit, or use special authorised couriers to ship our batteries ahead of us. For this shoot we did both.”

Footage from each of the six cameras was digitally stitched in post-production to create the spherical image and the drifting balloons were also realised using visual effects.

To see the fully interactive Miru spot click here, or see the non-interactive version below: