Action star Dwayne ‘The Rock’ Johnson will film big-budget disaster movie San Andreas on location in Queensland, doubling the Australian state for California. Johnson will play a helicopter pilot searching for his daughter in the aftermath of an earthquake that devastates the Pacific Coast. 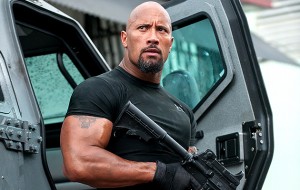 “This is fantastic news for Queensland and highlights the critical importance of the Newman Government's Production Incentive Scheme, the importance of our Payroll Tax Rebate Incentive and our world-class crew and infrastructure, particularly the water tank at Village Roadshow Studios at Warner Bros Movie World,” added Ian Walker, the Queensland Arts Minister.

Few big-budget features choose to film in California anymore because the state’s filming incentive offers a comparatively small annual fund and is allocated using a lottery system. The incentive is in fact specifically unavailable to the biggest productions.

San Andreas is the second high-profile international feature in a matter of months to choose Australia as a filming location. Angelina Jolie is currently shooting her true-life World War II biopic Unbroken (below) locally, a production that marks her second film as director.

We look forward to the filming of San Andreas using the Gold Coast's abundance of premiere facilities, skills and infrastructure.

Australia’s international production appeal has suffered in recent years partly because of the high value of the country’s dollar. The government is under continued pressure to expand the national filming incentive programme, but has so far resisted and instead opted for an officially short-term policy of negotiating one-off payments to secure the biggest international shoots.

The Avatar news puts additional pressure on Australia to sweeten its formal incentive deals and the news prompted a quick response from Australia’s Media, Entertainment and Arts Alliance.

“If we want to attract international big-budget feature films to this country like Avatar we need to take a serious look at the Location Offset, which currently sits at about 16.5%. That’s well behind what’s on offer in countries such as the UK, Canada and now New Zealand,” said one of the alliance’s directors, Mal Tulloch.