Developers in Manchester in northern England are preparing to launch a new filming facility aimed at drama productions. The Space Project is scheduled to open in May 2014 and will offer five purpose-built studio spaces, as well as workshop, dressing and make-up facilities. 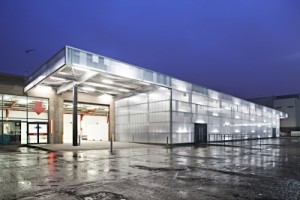 The new studios are being developed as part of Manchester’s broader Sharp Project, which provides office space for companies in Manchester working with digital content.

“It’s important for the region’s economy to capitalise on the UK’s expanding drama production sector which, in part, is driven by tax breaks introduced by the Government last April 2013,” said Sue Woodward, who devised The Space Project as Project Director at The Sharp Project.

“The Space Project creates a new offer for the North of England that will generate interest from producers and broadcasters both in the UK and overseas. With so much high-spec production and back stage space available it seemed fitting to call the building The Space Project. To have a purpose-built drama stage complex in Manchester is very exciting and will help satisfy the relentless demand for such facilities here in the UK.”

A suite of green-screen studios was opened by The Sharp Project in May last year and the facility already offers four production stages that house shows including Channel 4’s student comedy-drama Fresh Meat.

England’s main studio spaces are located in and around London, but there are not enough stages to meet demand, especially since the UK’s TV tax credit was launched in mid-2013. Film London has responded by negotiating the availability of more industrial space in the capital for filming purposes, although more British television production has been shifting north of the capital now that the BBC and ITV have bases in Salford near Manchester.

The Space Project will be near central Manchester and will offer four stages of 11,500 square feet and one of 9,000 square feet.