The BBC is filming on location in the Yorkshire region of northern England for two new productions. Actor and presenter Michael Palin will star in drama series Remember Me and comedy series Still Open All Hours will film on location in Doncaster. 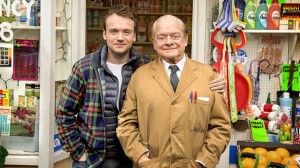 Palin made his name with iconic comedy troupe Monty Python and has spent the past few years making travelogue documentaries for the BBC. His role in supernatural series Remember Me will mark his first dramatic role in nearly 25 years.

“I was attracted to Remember Me not only by the northern setting,” said the actor, “but also by a good, strong challenging role, something I could really get what remains of my teeth into... I've always loved ghost stories, so playing the lead in one is a very exciting prospect.”

Still Open All Hours is a reboot of the BBC’s classic sitcom Open All Hours that was set in a small Doncaster grocer’s and originally ran for nearly a decade up to 1985. The BBC made a new one-off special for Christmas 2013 that proved a huge hit, prompting a six-episode commission.

I was attracted to Remember Me not only by the northern setting, but also by a good, strong challenging role, something I could really get what remains of my teeth into...

Star David Jason commented: “I am so delighted that we are doing a series of Still Open All Hours as the feedback from our Christmas Special has been so rewarding and encouraging. We want to have more fun giving the audience the kind of show they seemed to appreciate. It goes to prove that the corner shop is still open all hours.”

Screen Yorkshire recently got GBP7.5 million of additional funding from the European Regional Development Fund to enable it to support more productions filming in the area. Recent shoots have included period gangster drama Peaky Blinders and Death Comes to Pemberley.