Exit Films shot on location in Sydney Harbour with a replica Viking ship for a new spot for drink brand V Energy. The spot shows a troupe of Vikings choosing a new leader who inspires them by demonstrating new vigour with a V Energy drink. 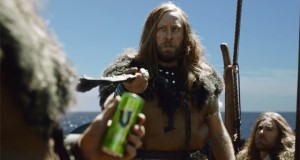 Having access to a replica Viking ship in Sydney Harbour was the main reason why the filming location was chosen, although the precise positioning of the ship for the shoot proved more of a challenge.

“Originally the idea was to shoot all the action on the replica Viking ship out in the harbour with a clear horizon,” explains Emma Lawrence, an Executive Producer with Exit Films.

“To do this we would have had to have anchored the ship on four points. This could have damaged the ship if we encountered heavy swells so the decision was made to shoot it at a marina.”

Originally the idea was to shoot all the action on the replica Viking ship out in the harbour with a clear horizon.

The team chose a marina that they could wrap in a green screen for the visual effects background of the ocean and sky for the scenes set on the actual ship. A harbour shoot was organised for the opening wide shot showing the ship on the open ocean.

“I think the cast had the biggest challenge,” Lawrence adds: “Leather and fur Viking outfits, wigs and beards all in full Sydney summer sun for two 12-hour days. They were amazing.”