Production company Goodcop filmed on location in Kenya and South Africa for a new spot for South Africa-based telecommunications company MTN. Coffee features two friends in a cafe ruminating on the long process that brought the coffee to their mugs. 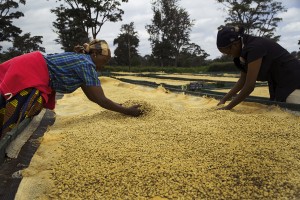 “For the commercial to accurately portray the process of coffee production, timing was critical. Coffee grows at very specific altitudes on and close to the equator, and needs to be harvested at very specific times.

“During production, the Kenyan harvest was in full swing on many commercial farms adjacent to and west of Nairobi. Access to these locations via Jomo Kenyatta International Airport was simple and convenient.”

To keep the spot’s sense of authenticity the locations were filmed as they were and the employees appeared largely in their own clothes doing their normal everyday work.

Kenya was recently used as a double for Ghana in a spot for Windhoek Lager featuring Galatasary football star Didier Drogba. The country is also occasionally visited by international feature productions. In mid-2013 a team from Reese Witherspoon’s The Good Lie filmed scenes at the Kakuma refugee camp in the north of the country.