Production company Goodcop filmed on location on the plains of South Africa for a new spot for Toyota Land Cruiser. Border Post shows a traveller panicking his way through a Central African border post before being pursued at speed by the guards in his Toyota. 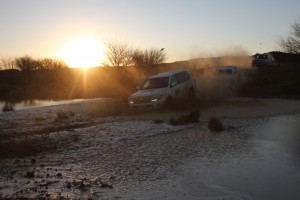 “Toyota Land Cruiser was shot in Calvinia in the Northern Cape around three to four hours from Cape Town,” explains Tess van Zyl, an Executive Producer with Goodcop: “We did an extensive location scout all over the Cape Province to find these specific locations based on [Director Daniel Levi’s] treatment that were in close proximity to each other to get the most out of our two-day shoot.

“We required an arid African landscape with an aerial of the car chase so we needed an expansive, almost saltpan desert feel, which we managed to find within an hour of the river and canyon locations.”

Goodcop’s art department built the border post set onto an existing derelict building. The terrain itself was perhaps the biggest challenge of the shoot.

We required an arid African landscape with an aerial of the car chase so we needed an expansive, almost saltpan desert feel.

“The terrain was pretty tough, blazing sun and heat,” Van Zyl adds: “The river scene was quite tense to shoot. The stunts and car chases needed to be very effective to show what the vehicles could do. Testament to how strong they are none got stuck!”

South Africa is a popular international filming location for commercials. Recent shoots have included an MJZ campaign for Guinness focussing on Congo’s stylish Sapeur community and Henry de Czar’s Catch Me If You Can spot for the Renault Megane.