Markenfilm Crossing GmbH recruited star couple Joshua Jackson and Diane Kruger for a road trip through the heat of Death Valley in eastern California. Confiscating their bottled water, the pair was challenged to rely on the drinkable water vapour emissions of the Mercedes’ F-Cell electric vehicle. 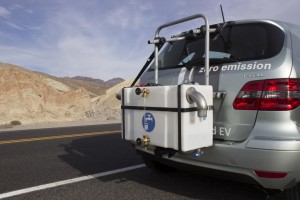 “Death Valley is the driest and one of the hottest deserts in the world,” explains Andreas Wagner, Senior Art Director at agency Jung Von Matt/Alster:

“Without enough water people will dehydrate in a short period of time. Therefore it was the perfect place to showcase the advantages of the F-Cell technology – with two Hollywood stars surviving only by the water produced by their car.

“There was a certain amount of uncertainty about our tank construction we attached to the car. We built the whole tank system in Germany. Due to the temperatures in Death Valley we didn't really know if the water vapor would condense and if we were really able to collect the emissions of the car. But everything worked perfectly fine.”

Death Valley’s record-high summer temperature is a staggering 57 Degrees Celsius, but the highest ground temperature was 93 Degrees Celsius, which was recorded at the aptly-named Furnace Creek in the summer of 1972. Nonetheless, the region offers extremes - conditions can also fall below freezing during the winter months.

As a state, California retains its popularity as a commercial filming location and production often surges in the fourth quarter as the big brands prepare their Super Bowl campaigns.