Stink illuminates forest in Portugal filming on location for IKEA

Stink filmed on location near Lisbon in Portugal for a new spot for Swedish furniture retailer IKEA. The commercial shows a forest at night illuminated by countless household lights and promotes the brand’s long-term pledge to sell only energy-efficient LED lighting.

“The brief was to find a magical and unusual forest which the camera could journey through and reveal more and more IKEA LED lights in a variety of settings - interesting trees, boulders, lakes and a meadow - and also in smaller micro-environments like hollow tree trunks and roots,” explains Nick Page of Lisbon-based service company Page International.

“It was also important that the forest had some elevation so that we could lead up and into the big final wide where we would like down a hill and see hundreds of lights,” Page adds.

The production team chose the forested area of Sintra, a useful filming location that fitted the visual brief and was only a 40-minute drive from Lisbon so crew accommodation wasn’t needed.

The brief was to find a magical and unusual forest which the camera could journey through and reveal more and more IKEA LED lights in a variety of settings.

With the forest chosen, the team’s Art Director Artur Pinheiro picked the specific filming locations for Director Martin Krejci, making his decisions based on Krejci’s visual brief and the production’s various logistical requirements.

“We had planned a three-night shoot and Martin chose one different location for each night,” Page continues. 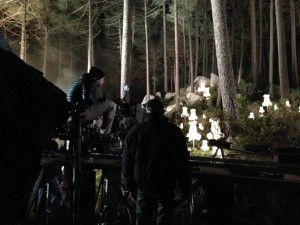 “The great thing about each of these locations that Martin selected was that they each had five or six different environments, so in the end the film had a wide variety of forest locations which was essential to enabling us to show such a wide range of IKEA LED lights.”

The team’s biggest logistical challenge was finding the location for the final image, a wide shot of the entire forest that included more than 500 lights. In the end they found a spot that offered a hill but no undergrowth, which enabled the team to use a cherry picker to dress the tops of the trees with lights.

“The producer Juliet Naylor was very aware of the logistical demands of finding a location which looked great, but which also had decent access that would enable us to dress and cable the hundreds of lights both on the ground and also hanging from trees,” Page comments.

“It was still by no means an easy shoot, and it took over three days to rig, dress and pre-light, but in the end it looked absolutely amazing!”